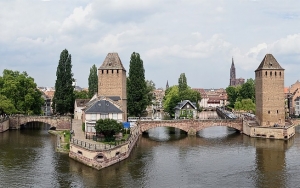 The French hydropower and dam industry welcomes the world hydro community to Strasbourg. After successful events in Lyon (2009) and Bordeaux (2015), delegates will have the opportunity to visit the Grand Est region, where EDF operates 10 hydro schemes on the Rhine, one of which (Vogelgrun) is a demonstrator project for the EU-funded XFLEX scheme.

The extensive experience of supporting organizations EDF and CNR, both within France and abroad, will be well reflected in the programme, and on the study tours.

France has around 25 732 MW of hydro capacity in operation, and a further 822 MW of hydro at various stages of development. Hydro generation increased to more than 65 TWh in 2020.

The two most important recently completed schemes were the addition of a 240 MW surface powerplant at the 320 MW La Coche pumped-storage scheme in the Isère valley, and the 92 MW Romanche Gavet scheme in the southwest, where six surface plants and five dams have been replaced by one under-ground powerplant. The country plans to double its renewable energy over the next ten years, with hydro, solar and wind schemes.

Strasbourg, the capital city of the Grand Est region of France, formerly Alsace, is also the formal seat of the European Parliament. On the border of Germany, and also close to Switzerland (and very close to many hydro plants on the Rhine) it is an ideal meeting point for the hydro industry. Its culture and architecture blend both German and French influences.

The newly refurbished Centre de la Musique et des Congrès is a state-of-the-art venue, modern and spacious, and has impressive measures in place for hosting a safe conference during the COVID recovery period. More details can be found on p12 of this brochure.

The focus of the conference will be on the impact of hydropower worldwide, and optimizing its ongoing contribution to progress and development.

The theme ‘Roles of hydro in the global recovery’ is inspired by policies and plans set out by all the main policy drivers in the power sector, clearly indicating that hydro and pumped storage will have a much greater role to play in the energy transition, especially as the world recovers from the effects of the global pandemic.

A special session will look at challenges which utilities faced with hydro schemes during the pandemic, as well as what was achieved despite the unprecedented problems.

As always, much attention will focus on the potential and development needs of the less developed countries, and also on climate resilience, engineering for challenging sites, and the synergy of hydropower with other (intermittent) renewable energy sources.

One presentation will examine lessons learnt about siting hydro schemes in areas prone to natural disasters, in the light of the Chamoli disaster in northern India.

The conference aims to encourage an exchange of experience between experts from nations at various stages of developing their water resources.

This year we are devoting several sessions to hybrid systems, following the success of our virtual conference, SOLAR-HYDRO 2021, in July.

As always, our programme is designed to be practical and topical, forming the bridge between policy-makers and practitioners.

Click on the link to attend this event as a delegate or exhibitor: https://www.hydropower-dams.com/hydro-2022/